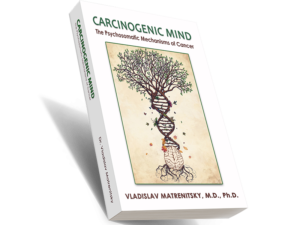 The book “Carcinogenic Mind. The Psychosomatic Mechanisms of Cancer” by Dr. Vladislav Matrenitsky is published in Russian in Ukraine (2017) and in English in 2019. This is the first Ukrainian manual in psycho-oncology.

The role of the psyche in the origin of cancer has been discussed by scientists for more than a hundred years. This book presenting a big number of studies that prove: our mind is the main source of cancer.

The author uses an interdisciplinary approach, involving data from psychology, oncology, psychoneuroimmunology, philosophy, epigenetics, and other branches of knowledge. Step-by-step, he reveals the inseparable connection of psychological, social, spiritual, and physical mechanisms of cancer. It is analyzed throughout the whole continuum of illness, starting with a predisposition in the womb and childhood.

A tumor is just the tip of the iceberg. The basis is inability of a person to cope with the problems of life, psychological traumas and intrapersonal conflicts, arising from unmet needs. This leads to chronic psychophysiological stress, which suppress the immune system and other systems of anti-cancer protection. The result is an existential crisis, leading to the loss of will to live, initiating a program of a person’s self-destruction (unconscious suicide).

Overcoming the crisis, achievement of post-traumatic growth and spiritual awakening can revive the natural healing powers of the body and bring the patient to remission or complete healing.

The book is written in the scientific-popular format and is intended for medical doctors and psychologists, as well as for patients, wishing to understand the causes of their illness and find the ways to health.

The history of the development of ideas about the role of stress in the occurrence of cancer is described.  Data is provided and analyzed as to how acute stress becomes chronic, and why it causes psychosomatic diseases.

It is reported that increased sensitivity to stress can be inherented by a person from the moment of conception and/or arise in the womb of the mother. This creates vulnerability to disease (predisposition), which may increase with trauma at birth, and can progress with an unhappy childhood. As a result, a specific “cancer” type of personality arises.

People who did not learn to cope with stresses are for a long time immersed in the anxieties that follow a traumatic event (for example, the death of a loved one). Or they are not able to fulfill the needs they consider important, such as love, respect, freedom of expression, which provokes severe intrapersonal conflicts. The result is chronic oncogenic psycho-physiological stress.

In this part it is said that prolonged, unresolved suffering leads a person to a state of psychological “suffocation”, feeling of suppressed subordination, helplessness, and depression. The hope for the opportunity to live in a better way, to be what he/she wants is lost. This creates a precancerous condition. However, a potential patient often is not consciously aware of these feelings and thoughts because of the habit of avoiding negative emotions.

Depression, helplessness, and hopelessness deplete a person’s energy and create a spiritual-existential crisis. It results in a subconscious desire to get rid of one’s problematic life (unconscious suicide). Heavy distress destroys the immune system as well as other bodily systems of anti-cancer protection. In the psyche arises an oncodominant, which triggers a deadly illness.

Given an early awareness of his/her problems, a person referring to psychotherapy and finding a way out of his/her crisis can stop the growth of the tumor at the initial stages, and even lead to its regression. Otherwise, the disease continues to develop. A powerful subsequent psychotrauma resulting from diagnosis and treatment significantly activates distress and therefore deepens the crisis. This worsens the prognosis of the disease and contributes to metastasis.

In this part, it is proved that the lack of qualified psychological assistance after the end of one’s treatment leads to mental disorders, deepening of depression, post-traumatic stress disorder, and most importantly – to the progression and/or relapse of the disease.

In contrast, using psychotherapy, integrative rehabilitation, and spiritual awakening leads to post-traumatic growth that activates the patient’s own healing resources, restoring the immune system and leading to a stable remission. Data on the spontaneous disappearance of the tumor due to psycho-spiritual transformation and the “reset” of the meaning of life are provided.

Summarizing the presented research, the author suggests a “road map” – an integrative scheme of development and course of oncological diseases, from the point of view of a biopsychosociospiritual model of medicine. The way in which this system can be used is demonstrated on the clinical example of the illness of movie star Audrey Hepburn.

The necessity of a wide involvement of the psychotherapeutic approach in cancer treatment, especially the ways of active influence of the psyche on the tumor, is discussed. The author comes to the conclusion that the recommendations of the ancient spiritual and philosophical teachings are more important than ever for the psycho-spiritual prevention of all diseases.

The book is available in both printed and electronic editions.